Home / Celebrating the 20th National Congress | The power of group struggle, coalescing under the party flag

Celebrating the 20th National Congress | The power of group struggle, coalescing under the party flag 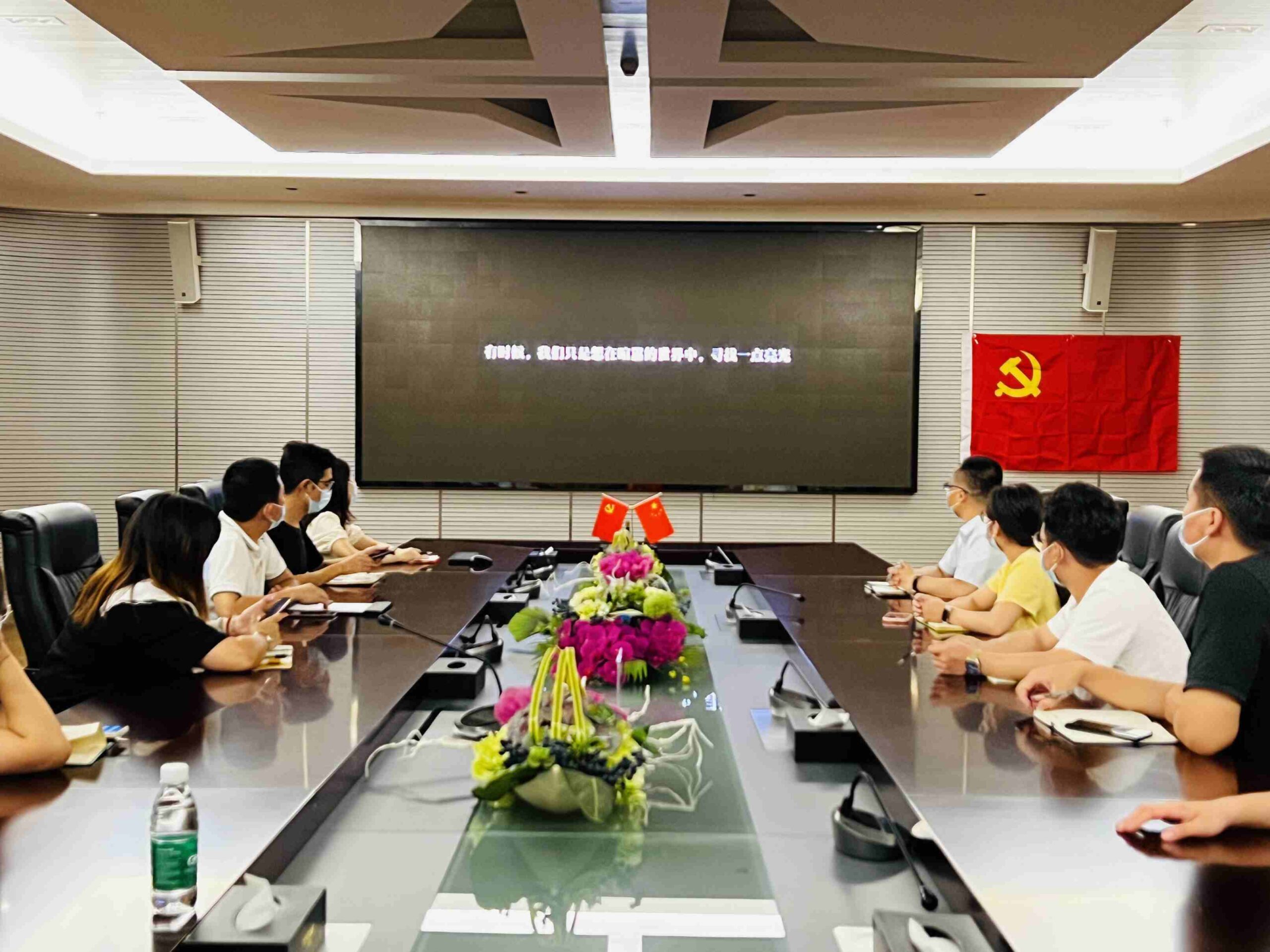 Topstar Chairman Mr. Wu Fengli had said at the Entrepreneur Symposium held by the Guangdong Provincial Party Committee, “I came out of the military. Has always believed that people should have some faith and do business with more faith. At present, there are 71 members of the party branch of Topstar. They are like a small sun; the red beliefs passed out. Influencing the colleagues around to become excellent. So whenever bears are always the first to lead everyone to rush up whenever there is the difficulty.”

With the ups and downs of the new crown pneumonia epidemic, the party members of the party branch played the spirit of rushing forward under the situation of workforce shortage. Without affecting their everyday work, they took up the duties of factory prevention and control officers, propagandists, exfiltration, and volunteers. This made the party flag fly high on the front line of epidemic prevention and control and helped the company’s administrative transition to build a regular epidemic prevention system smoothly and reduce the epidemic’s impact on the company’s production and operation.

Innovation on the road is constantly attacking the complex party members’ figure. Zhang Xiaohui, Zhao Lei, and other comrades are the backbone of Topstar R & D. They said, “with the special ability to bear hardship, special combat, special dedication to the spirit of research and development. Take out the passion and talent, with craftsmanship and originality, for Topstar casting boutique.” Since the establishment of Topstar, they have successfully developed their brand of four-axis and six-axis robots. The company has its core technology of injection molding machines, industrial master machines, and other core products.

Party members are present in every position of the company. They adhere to the party building to lead the company’s enterprise construction and always maintain the advanced nature of communist party members. They persuade people around them with their actions and promote the high-quality development of the company in the fields of R&D, production, business, and management.

Topstar party branch has 71 party members, including 3 Ph.D. students and 21 master’s degree students. Distributed in production, research and development, finance, and other vital areas. However, this is far from enough for Topstar, which is still growing. We need to absorb more excellent colleagues further to join the organization.

Thus, Topstar continues to broaden the development of channels and objects, the business line of the excellent activists absorbed into the party organization. At the same time, the company focuses on developing party members from the front-line team of research and development, production, sales, and other businesses and constantly introduces new ideas and talents. This year, the branch has received more than ten applications to join the Party and developed several party activists and CPC reserve members.

First, the learning channels are guaranteed. The party branch ensures that the company’s bulletin board, the company’s newspapers, and magazines. And the official media can timely promote the Party’s policies and regularly carry out party members’ life meetings. And combine with the company’s corporate culture construction to periodically publicize the deeds of outstanding party members and employees.

Second, there are positions for learning activities. Offline resources: the establishment of party members’ activity room. Providing such designated learning materials as Xi Jinping’s “On the History of the Communist Party of China,” as well as auxiliary materials such as “Jiao Yulu Turn” and “The Long March of the Red Army.”

Fourth, the organization has unity. The party branch fully unites the company’s league branch and a labor union. It actively drives the league members and outstanding employees to insist on centralized learning and independent learning of party history. At the same time, strengthen external communication, and build exchanges and studies with the sixth branch of the joint organ. the local tax party branch and other outstanding organizations in Dalingshan

This year, we successfully held a series of thematic party day activities to celebrate July 1, the 73rd anniversary of the founding of the People’s Republic of China, and the 20th Party Congress.

In May, to celebrate the 101st anniversary of the founding of the Party, to welcome the victory of the 20th Party Congress, and to promote the implementation of party history learning and education. Topstar Party Branch held a “celebration of July 1 to welcome the 20th Congress” theme of the party day activities.

The Party branch led the company’s party members and outstanding staff representatives to the Humen Opium War Naval Warfare Exhibition Hall and Humen Naval Warfare Exhibition Hall. Lin Zexu Memorial Hall, for party history education activities. All party members listened to the martyrs’ deeds. Paid tribute to their souls and felt the hard-won peace era. This is the blood and sacrifice of our forefathers, party members and cadres should be more grateful and cherish it, and the patriotic spirit of our forefathers will inherit and carry forward.

4.2 “I have something to say to the party and Topstar.”

Wu Jinhua, manager of the Audit and Supervision Department and development target, said, “In the epidemic prevention and control work and daily volunteer activities, I felt the spirit of the party members in the forefront. That makes me feel that joining the Party organization is honorable and a responsibility. I will always remember my original intention to complete my work with high efficiency and quality and continue contributing my strength to the company. I sincerely wish the Party is stronger, the country is more prosperous, and the company can grow stronger in the new era.”

At the meeting, everyone said they should never forget history. Cherish the present, and inherit and carry forward the spirit of patriotism. “Do not forget the original intention. Remember the mission” the Party’s hundred-year journey is not easy to come by, and Topstar’s fifteen-year journey is also not easy. However, we must firmly believe in our ideals and beliefs and take the initiative to bear the burden of the times. Therefore, we are making unremitting efforts to realize the Chinese Dream of the great rejuvenation of the Chinese nation. At the same time, we will make unremitting efforts for Topstar’s second 15 years.

On the eve of National Day, Topstar Party Branch held a seminar on “Celebrating National Day and 20th National Congress” 25 party members and 15 excellent staff representatives participated in the activities. First, we watched the film “Ordinary Figures” in the new era. Which mainly tells the stories behind the hard work of delivery workers, couriers, doctors and nurses, and railroad personnel. Military researchers and developers. After the film, everyone felt a lot of emotions and expressed their thoughts freely.

Tang Juan, accounting manager of the financial center and development target, said: “The ordinary casts greatness. Every step of national construction is driven by millions of people doing seemingly ordinary but great things. I am engaged in everyday financial bookkeeping work. The economic data input may be specific. But the centralized data can make major core decisions for the company, regardless of whether their work is big or small. It would help if you were dedicated no matter how big or small your work is. Complete it on time and with high quality, and provide your strength for the company’s high-level development.

Whether we are Communist Party members or ordinary people, we must set higher requirements and expectations for ourselves in the new era. We must love our jobs and dedicate ourselves to carrying forward the Long March spirit of “never forget the original intention, indomitable” with practical actions. At the same time, we will also work hard, with reasonable effort. To practice the core values of Topstar’s “group struggle, group success.”

The top star party branch will continue combining party culture with enterprise construction. And guide the party members to promote the close unity of employees actively. In the new historical period, The Party branch will better welcome the victory of the 20th Party Congress. Push Topstar towards a better tomorrow!

Prev: Xiao Biliang, director of Dongguan City Bureau of Industry and Information Technology, came to Topstar for research and guidance